The woodrat or the pack rat as it is commonly known as has the Binomial name, Neotama. However, that’s not how most people know it. The most common name for this type of rat is very interesting – trade rats.

How do I identify Wood rats?

These rats posse a typical rat-like appearance. They are almost the same size as Norway rats. They look similar to deer mice but are larger in size. These rats have light colored feet and a light-hued underbelly. They have long tails, huge ears, and big black eyes. They are also larger than harvest mice, cotton rats, and grasshopper mice. Their physical features also depend largely on their subspecies.

Which are the different types and species of Woodrats?

There are almost a dozen subspecies of wood rats found in North America. Some of the common species found in the US and Canada are:

This creature has a total length of 300 to 450 mm, with the tail measuring between 130 to 180 mm. It has large white feet, large ears, and noticeable eyes. The male weighs more than the female.

This medium-sized woodrat has typical large ears, protruding eyes, and a dual colored tail. These creatures also have a whitish underbelly and white feet. Their approximate total length is 328 mm.

It resembles a mouse more than a rat. It has a furry, dual-colored tail. It can be distinguished easily due to prominent large ears and eyes, long whiskers, and a bigger head. The Allegheny woodrat like most other rats also has a white underbelly and feet.

The bushy-tailed woodrat is among the largest subspecies of the woodrat. Some of these bushy-tailed creatures may grow up to a size of almost 15 inches and may weigh approximately 11 ounces. They are easily recognizable due to their squirrel-like tail, extra long whiskers, and large bulging eyes.

Dusky-footed woodrats are small rodents. They have round-shaped ears. They can be identified with the help of their furry tails which easily differentiate them from black rats. They earn their name “dusky-footed” due to the dark color of their feet. 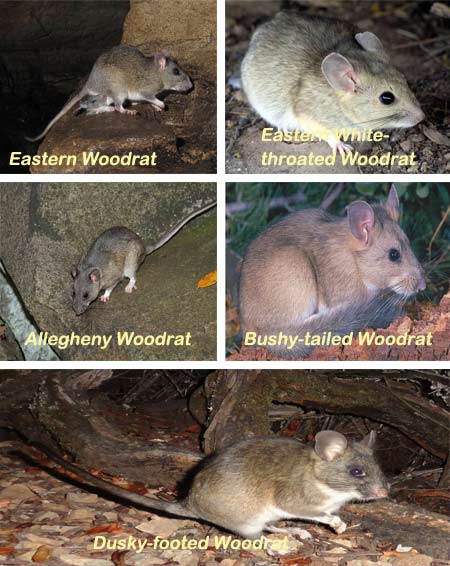 How to differentiate between a Woodrat and a Norway rat?

Woodrats are almost the same size as the Norway rat. However, they can be differentiated from the Norway rats due to differences in their:

Are Wood rats an invasive species?

The woodrat is not an invasive species. In fact, it is native to several parts of North America. In fact, in Key Largo, Florida this rat was an indigenous species. However, over the years due to a decrease in habitat and an increase in housecat population, now woodrats in Florida are only found in a few public preserve areas.

The lifespan of Woodrat & Reproduction

The lifespan of this rat is approximately two years in the wild. But they may live up to six years under captivity.
They gain sexual maturity after about 60 days of birth. Female woodrats may deliver up to five litters per year. Each litter may contain approximately five young ones.

Shelter is very important for these rats as they are not able to bear extreme cold or hot weather and direct sunlight. Their nest is called a midden. They use different things for strengthening and fortifying their midden including twigs, sticks, cactuses, and branches. They may also use bones and food materials for building their complex shelters. The approximate size of the midden is about 4 feet across.

Food Habits – What do Wood rats like to eat?

The typical diet of these creatures consists of nuts, berries, seeds, vegetation, plants, twigs, insects, small mammals, and even birds. They may feed up to 2 ounces of food and require approximately 1-2 ounces of water every day.

Their food habits differ according to the species and their geographical range. For example, the desert woodrat diet includes vegetarian items like mesquite leaves, cacti, and beans along with non-vegetarian items.

On the other hand, the bushy-tailed woodrat prefers mostly an herbivorous diet. It likes to feed on vegetative materials like leaves, twigs, seeds, mushrooms, mustard plants, fruits, and cacti. Occasionally, they may eat non-vegetarian materials like insects and anthropods.

Pack rats get their name due to their extensive habit of hoarding items in or around their nests. They are particularly attracted to shiny objects. Some of the common things that they are attracted to are bottle caps, foil scrap, coins, beer can tabs, and jewelry.

They have a unique habit of dropping what they are presently carrying and “trading” it for a new item. So, they are also called Trader Rats.

They are generally nocturnal but and prefer the night time to foray outdoors in search of food. Woodrats are good climbers. And they often build dens in trees or rocky ledges.

The main signs of their infestation are:

Damage caused by the Woodrat:

Pack rats cause damage to human property as well as gardens and agricultural fields.

They chew on and through a lot of things including car wires, attics, log cabins, sheds, and outhouses. They cause damage to pool equipment, cars, A/C insulation, homes, and even ceilings due to their nesting habits. They will tear up furniture and mattresses to build their nests. And they are sure to steal shiny objects like wires, mirrors, coins, and jewelry for fortifying their nests.

They are a problem for trees, especially redwood trees and fruit trees as they feed on the twigs and branches. Agricultural crops can incur losses due to their habit of feeding on seeds.

Hazards of the Woodrat in the house—do Wood rat spread diseases?

Woodrats are associated with several diseases and are a serious hazard to have near humans. Some of the diseases they spread are:

These rats are known to have caused plague in California.

Contagious disease that’s caused by tick bite, when the tick itself has fed on a woodrat.

This disease can be transmitted to humans via the bite of a fly which in turn has been infected because of feeding on wild woodrats.

How to get rid of woodrats?

Prevention is the key. It is important to prevent them from getting inside your property. Their population can be controlled by eliminating their shelter and nesting sites. Here are some steps that help in controlling their infestation:

Traps and Repellents that work against Wood Rat

These rats are not neophobic, they are not afraid of new objects around them. So they can be easily trapped using regular snap traps. Good baits for these rats include nuts, peanut butter, raisins, dried fruits biscuits, meat, and bacon rind. Live catch traps are also helpful in trapping them. Burrow-entrance traps are also suitable for controlling their infestation. Glue boards are also very effective for catching them.

Woodrats are not as destructive as other species of invasive rats. However, they are a cause of several dangerous diseases. So they need to be exterminated to avoid potential health problems. Like all rodent control, woodrat control needs to be a thorough practice and should be done at regular intervals.